You may have read something posted in the comments section of this blog not long ago:

“I think we may be at a point in time when creating the capacity to evangelize and the systems by which to spread the word is most crucial. I am aware that, almost always these days, I am either preaching to the choir or unable to say something that penetrates the resistance to awareness of those who are comforted by their ignorance.”

I am often frustrated also when people miss the message of the Gospel. The long evil campaign to separate man from God is almost complete. Attempts to present the Gospel of Christ to people are almost sure to find some shallow argument followed by a quick flat out rejection. Although some pay attention and conversions are not rare, certainly they are not as numerous as one would wish. That is in itself a sign of the times.

When I say “a sign of the times” there is always someone who says  – eyes rolling  – “here he goes again with his end times theme” and sure, here I go again. There are some that have concluded that since “no one knows the day and hour” there is no need to “keep on the watch” like the virtuous virgins of Jesus’ parable. And since we do not have to keep on the watch, there is no need to learn the faith in depth. As long as we know when to kneel during Mass, and have some general idea of what is permitted and not permitted we are just fine. Well … Jesus stongly disagrees.  One can easily understand that from Matthew 24:48 where he says: “But if that evil servant shall say in his heart: My lord is long a coming …” Sure for today standards the word “evil” sounds a little harsh but wouldn’t you agree that much of increase in evil from the 20th century onward coincides with the Western Civilization gradual abandonment of Christianity?

Over the centuries after the Apostolic Age the preaching of the Gospel reached a zenith and then began to fade. I see the last five centuries as a long night filled with nightmares and devilish shadows. I also believe that night is coming to an end.

John 21:1-3 – Afterward Jesus appeared again to his disciples, by the Sea of Galilee. It happened this way: 2 Simon Peter, Thomas (also known as Didymus), Nathaniel from Cana in Galilee, the sons of Zebedee, and two other disciples were together. “I’m going out to fish,” Simon Peter told them, and they said, “We’ll go with you.” So they went out and got into the boat, but that night they caught nothing.

The scene of this passage in the Gospel of John is reminiscent of the first time Jesus found Peter  fishing.

Luke 5:1-11 – One day as Jesus was standing by the Lake of Gennesaret, the people were crowding around him and listening to the word of God.  He saw at the water’s edge two boats, left there by the fishermen, who were washing their nets.  He got into one of the boats, the one belonging to Simon, and asked him to put out a little from shore. Then he sat down and taught the people from the boat.  When he had finished speaking, he said to Simon, “Put out into deep water, and let down the nets for a catch.” Simon answered, “Master, we’ve worked hard all night and haven’t caught anything. But because you say so, I will let down the nets.” When they had done so, they caught such a large number of fish that their nets began to break. So they signaled their partners in the other boat to come and help them, and they came and filled both boats so full that they began to sink. When Simon Peter saw this, he fell at Jesus’ knees and said, “Go away from me, Lord; I am a sinful man!” For he and all his companions were astonished at the catch of fish they had taken,  and so were James and John, the sons of Zebedee, Simon’s partners. Then Jesus said to Simon, “From now on you will catch people instead of fish.”  So they pulled their boats up on shore, left everything and followed him.

The fishing business after Calvary

Sometimes when we are perplexed we go back to the familiar things, that’s only human. Peter was perplexed by the events at Calvary and the brief apparitions of Our Lord every Sunday after the Resurrection. He could not grab the sense of it all. Peter was missing the constant walking with the Lord, he could see the changes but he could not understand where he was going.

A friend of mine used to say: “When the going gets though, the tough go fishing!” and so when his business was slow he used to take a short vacation to clear his mind and start again afresh. Perhaps Peter was thinking along those lines when he told the others, “I’m going fishing!” but God had other plans for the perplexed disciples.

John 21:4-6 –  Early in the morning, Jesus stood on the shore, but the disciples did not realize that it was Jesus. He called out to them, “Friends, haven’t you any fish?” “No,” they answered. He said, “Throw your net on the right side of the boat and you will find some.” When they did, they were unable to haul the net in because of the large number of fish.

The Gospel of John presents us here with an apt metaphor of the return of Jesus. Each one of Christ’s apparitions after the Resurrection highlights one aspect of his parousia, this is not different. Jesus is standing on the shore and asks the men in on the boat if they have any fish. He already knows the answer. The scene of the first encounter with the disciples is being re-created here, perhaps in the same place where the first meeting occurred. Didn’t the angels say that Jesus was returning in the same manner? (Acts 1)

Jesus tells them to cast the net off starboard. He assures them they will catch some fish. They obey and the net comes out bursting with fish. John recognizes the Lord immediately. The morning fog is clearing with the first light of day; Jesus is standing on the shore, the sun slowly rising behind him. That is a majestic representation of a moment — hopefully not far in time — when the Lord will come and find the Church perplexed, still trying to work in her apostolic mission to an indifferent world, gathering nothing.

John 21:7-6 – Then the disciple whom Jesus loved said to Peter, “It is the Lord!” As soon as Simon Peter heard him say, “It is the Lord,” he wrapped his outer garment around him (for he had taken it off) and jumped into the water.  The other disciples followed in the boat, towing the net full of fish, for they were not far from shore, about a hundred yards.  When they landed, they saw a fire of burning coals there with fish on it, and some bread.  Jesus said to them, “Bring some of the fish you have just caught.” So Simon Peter climbed back into the boat and dragged the net ashore. It was full of large fish, 153, but even with so many the net was not torn.  Jesus said to them, “Come and have breakfast.” None of the disciples dared ask him, “Who are you?” They knew it was the Lord. Jesus came, took the bread and gave it to them, and did the same with the fish.  This was now the third time Jesus appeared to his disciples after he was raised from the dead.

It is Peter who hurries to encounter the resurrected Jesus, and later it is Peter who drags the net filled with fish ashore. ” In the end times the Church will rush to encounter her Lord, and she will be blessed with many new disciples when the world realizes that Jesus is really alive. The universal awareness of the Resurrection will cause many to repent and come to the fold.

We are approaching the fulfillment of that model represented in the great catch of fish. The massive conversion of Nineveh after the “sign of the prophet Jonah” and the great catch of fish represent one single event, a massive — almost universal — conversion that will take place after mankind miraculously realize the truth of the Resurrection. That is the glorious end of the harvest of souls. Peter was asked “Do you love me more than these [fish]?” because his fishing business was coming to an end. (Luke 5:10) Peter’s boat is  now the Church and he is going to be “catching men alive” in fulfillment of Jesus’ promise to him — the end of Peter’s fishing business is that great catch by the shore. In reflection the end of the Age of the Gospel for the Church happens at the edge of time, just before she is charged with a new mission: to teach the nations the way of Christ.

The moment is approaching. Prepare your nets. We’re going fishing. 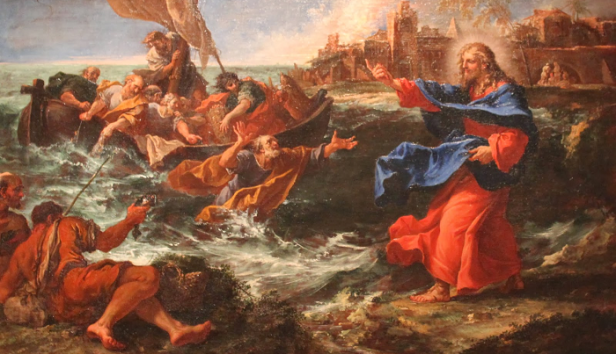