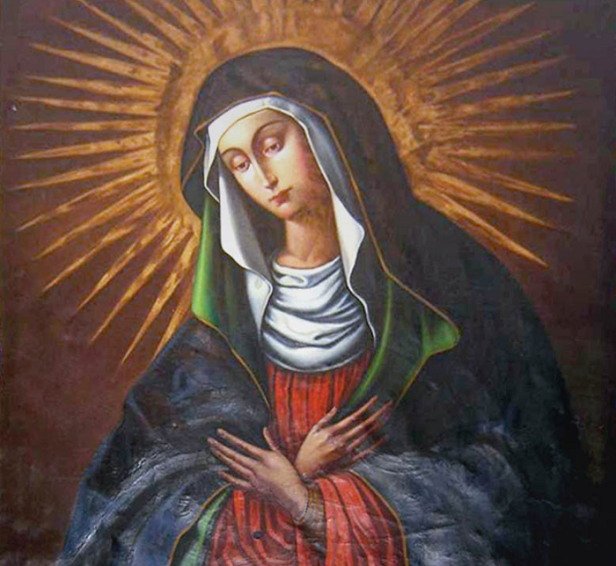 I am going to avoid using the word “alleged” further in this article, to avoid repeating it many times. The reader will have to decide where to use it. As far as I am concerned  it should not be used at all. Let us begin with number 28 of the 81 prophecies listed at the end on my previous post Our Lady of Mount Carmel in Puerto Rico. This one I picked is related to some of the things I’ve been studying:  “The Virgin of Dawn will come to the mountain.” Who is the Virgin of Dawn?

There is a painting known by that name in Vilnius, an image considered miraculous by many. The painting was at one time displayed above one of the city gates. It was  later placed inside a Church. In 1927 the painting was analyzed and restored. The restorer, Mieczysław Skrudlik established that it was painted circa 1630–50 by an artist called Luke, who is also the author of an image found in the Corpus Christi Church in Kraków painted in 1624.

A chapel dedicated to house the miraculous depiction of Our Lady of Dawn was erected in 1671 by the Discalced Carmelites. According to a story, when Vilnius was captured by the Protestant Swedish army during the Great Northern War of 1702, Our Lady of Dawn helped the people of Vilnius by causing the heavy iron city gates to fall at dawn, crushing four Swedish soldiers. Soon after, the Polish-Lithuanian allies were able to mount a successful counter-attack on the Swedes. The image was visited by Pope John Paul II in the 1990’s. She was crowned as Mother of Mercy by the Pontiff.

Those who have read my book Guadalupe: A River of Light  may have already noticed this curious coincidence: the name of the painter is Luke, just like St Luke who carved the first image of Our Lady of Guadalupe now venerated in Extremadura, Spain. In the book I briefly mention this hypothesis: that St Luke—from Heaven—may have been the author of the image that appeared on St Juan Diego’s cloak “as if painted by angels”. You may also remember that the name Luke comes from Lucanus, meaning radiant light, and that Our lady of Guadalupe first appeared to St Juan Diego at dawn on the mountain of Tepeyac.

The humble hut built by the lumberjacks for Our Mother—as the Puerto Rican peasants called her—resembles the tabernacles built by the Israelites to celebrated the Sukkott  the feast first observed by Israel after crossing the Jordan River into the Promised Land.

Leviticus 23: 39-44 — “‘So beginning with the fifteenth day of the seventh month, after you have gathered the crops of the land, celebrate the festival to the Lord for seven days; the first day is a day of sabbath rest, and the eighth day also is a day of sabbath rest. On the first day you are to take branches from luxuriant trees—from palms, willows and other leafy trees—and rejoice before the Lord your God for seven days. Celebrate this as a festival to the Lord for seven days each year. This is to be a lasting ordinance for the generations to come; celebrate it in the seventh month. Live in temporary shelters for seven days: All native-born Israelites are to live in such shelters so your descendants will know that I had the Israelites live in temporary shelters when I brought them out of Egypt. I am the Lord your God.’” So Moses announced to the Israelites the appointed festivals of the Lord.

When Our Mother announces that she is going to end her visit to Puerto Rico, she enters into her final 40 day seclusion on August 21, 1909. That period of preparation for her  passage back into heavenly life ended on September 29, 1909. That is the Catholic Feast of St Michael and the Archangels but on that year, it coincided with 15 Tishri, the beginning of the Mosaic celebration of Sukkot — a commemoration of the passage of the Israelites from their time in the desert wilderness into the Promised Land (See Revelation 12:6). Some of my readers that are beginning to hone their sacred calendar skills, beat me to the punch in observing that the Great American Eclipse of 2017, began on August 21 as the exact time when the sun was setting in Jerusalem. This is quite remarkable because Our Mother told her Puerto Rican followers that Santa Montaña was “frente a Jerusalem”—frente meaning “in front”, or “in opposite position to”—just as sundown is the opposite of dawn. That eclipse crossed the United States territory from NE to SW on a path touching seven cities called “Salem” in seven states of the Union. Salem comes from the Hebrew word for “peace”, shalom. As it had happened before the first apparition of Our Mother in Puerto Rico, the US total solar eclipse of 2017 was preceded by a fierce storm, hurricane Harvey.

From September 16, 2017 to October 3 of the same year, Puerto Rico was hit by the 13th storm of the season: hurricane Maria. That is a remarkable coincidence considering that in 1985, another storm, Isabel remained in stationary position over the island several days, drenching the slopes of the mountains near the neighborhood of Mameyes, close to the city of Ponce. As a result, Mameyes was erased from the map when the mountainside collapsed early in the morning  of October 7, 1985—on the feast of Our Lady of the Rosary—killing close to 1,000 residents according to some accounts.

Hurricane Maria, the most recent disaster to hit the island has nearly destroyed the local economy. Six months after the event, Puerto Rico is still struggling to rebuild its energy and water grids. A NOAH night satellite image shows the devastation affecting Puerto Rico and the US Virgin Islands.

I can’t quite connect all the coincidences that—in my opinion—appear to be meaningful and point to the eschatological character of the apparitions of 1899-1909. In 1899, Puerto Rico had just entered into a new era under a new  US administration. The Spanish American War had ended the previous year. Our Lady of Mount Carmel appeared there at a time when Protestant missionaries and carpetbaggers were pouring on the island, in an attempt to change its Catholic character, its local traditions and customs. I am reading reports that seem to indicate that the local Catholic hierarchy has tried to ignore—if not actually suppress—the apparitions at Santa Montaña. It would not surprise me if those awful tragedies are an indication of divine displeasure. Are those signs meant to wake up the Catholic leaders of Puerto Rico to the importance and significance of the apparitions of Santa Montaña?

The connection of Our Lady of Dawn with the first Sukkot celebrated by Israel as they entered the plains of Jericho in the Promised Land, seems to be quite clear. The whole stay of Our Mother in Puerto Rico and her modus vivendi, appear to be a model of the Era of Peace that is going to follow the big storm we are approaching. Those who witnessed Our Mother’s arrival watching her floating over the sea, saw the beginning of a prophetic parable. The followers of Our Mother, as Elenita de Jesús (meaning “little light of Jesus”) were for the most part simple, uneducated peasants whose lives were changed by her example. The fruits of her teachings could not be more positive: honesty, dedication to community, hard work, cohabiting couples marrying before God, children baptized, sicknesses miraculously cured, order, and simple prosperity.

Was that event pointing at the beginning of the Age of Peace at Santa Montaña? Is that happy dawn upon us? I am reminded of the Canticle of Zechariah, the father of John the Baptist in Luke 1:76-80:

“You, child, will be called a prophet of the Most High.
You will go ahead of the Lord to prepare his way.
You will make his people know that they can be saved
through the forgiveness of their sins.
A new day will dawn on us from above
because our God is loving and merciful.
He will give light to those who live in the dark
and in death’s shadow.
He will guide us into the way of peace.”

Coincidentally, the seal of Puerto Rico, the oldest in the Americas, has a legend with the Latin words “Joannes est nomen ejus”, that is “John is his name”—those were the words written by Zechariah, father of John the Baptist. In the center of the Seal there is the Lamb of God, peacefully sitting on the Holy Bible, displaying the Seven Seals of the Apocalypse by St John the Divine. The island Our Mother chose to visit a century ago, may be holding the secret of the ages to come. Are we going to finally pay attention to the treasure Our Mother left there? Looks like Rome will have the last word.

2 thoughts on “Dawn at the mountain”