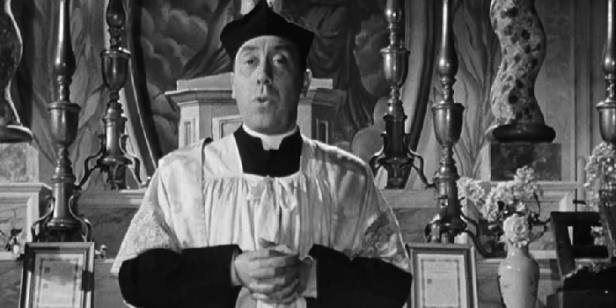 One of the best things that I ever encountered in a lifetime of reading was a little book by Giovannino Guareschi: Mondo Piccolo: Don Camillo, published in English as The Little World of Don Camillo. I remember reading it over and over, mostly trying to find out why was I so fascinated by the human scenery presented there by Guareschi (pron. goo-ahr-ehs-kee.)

I was only 10 years old when I read it for the first time in a Spanish translation belonging to my mother. Later I read it again in the original language as an exercise to improve my Italian. I have been revisiting that book for about six decades now. It never failed to entertain me. For me, Guareschi, Borges, and Hemingway are very easy to come back to.

I may be wrong in considering Don Camillo the pinnacle of perfection for a priest. His heart is in the right place. His life is a conversation with Christ. Fr. Camillo is so human and Christ is so perfectly good. Here is where my rant begins. What in the world happened to our priests?

Last August 15, I completed 17 years in the Catholic Church. May be I should say 27 because there was a long timid approach that lasted about a decade before my baptism. I have seen a lot in those years, I have endured many bad priests also. I met one or two saintly priests, a number of good competent professionals, and also a good number of rascals ranging from the perverted to the good for nothing pretentious “intellectuals” who could not reflect Christ if they were made of glass.

Recently, one priest sent me a Spanish translation of this article by Chris Ferrara. I won’t enter into the merits of the article, which bored me to tears. Chris Ferrara is a good man, and he may be doing the right thing. I am not qualified to even comment on Canon Law, and even less on the history of Canon Law. The whole thing remains a mystery to me. I am a simple man, perhaps a simplistic man. I am turned off when someone tries to convince me that the Pope is an trickster that somehow caught God unawares and made it to the 9th yard without anyone noticing his imposture. I am somewhat turned off by those who repeat that the Holy Spirit does not elect the Pope. Isn’t the Pope the Bishop of Rome? Let me add this tiny bit of Holy Scripture here:

“Take heed unto yourselves, and to all the flock, in the which the Holy Ghost hath made you bishops, to feed the church of God, which he purchased with his own blood.” (Acts 20:28 ERV)

Apparently the bishops of the 1st century were made episkopoi by the Holy Spirit. When did that actually change? No one has explained that part to me. So now we have a Bishop of Rome that seems to leave a lot of people (including me) perplexed, even disgusted. And we have priests and laymen that are basically saying: “listen, he is not the Pope, but I can tell you I am the Pope” just like Luther, Calvin, and so many others in their time dared to affirm: “forget that guy in Rome, follow me.” Well … to tell you the truth, I follow a completely different path when analyzing this problem. Forgive my rant.

First part. I don’t give a rat’s tail about who is the Bishop of Rome. I have no say in electing him. I was told I must obey him. Having said that, I will follow Peter anywhere  but there is one place where I won’t follow him: I won’t be with Peter cursing and blaspheming denying the Lord by the fireside while Jesus is inside being judged by the Sanhedrin.

While Peter was below in the courtyard, one of the servant girls of the high priest came by. When she saw Peter warming himself, she looked closely at him. “You also were with that Nazarene, Jesus,” she said. But he denied it. “I don’t know or understand what you’re talking about,” he said, and went out into the entryway.When the servant girl saw him there, she said again to those standing around, “This fellow is one of them.” Again he denied it. After a little while, those standing near said to Peter, “Surely you are one of them, for you are a Galilean.” He began to call down curses, and he swore to them, “I don’t know this man you’re talking about.” Immediately the rooster crowed the second time. Then Peter remembered the word Jesus had spoken to him: “Before the rooster crows twice[i] you will disown me three times.” And he broke down and wept. (Mark 14:66-72.)

No, I won’t follow Peter there. But I will follow the teaching of his Epistles. I know what the Magisterium of the Church has taught for twenty centuries. If a Pope was to deny any part of that, I will have the same reservations. I am a Catholic, I am not an idiot. I have seen and heard priests and bishops doing and teaching outrageous things. I never thought for a moment that I had the authority to question their ordination. Even when I have found some ordinations highly questionable. That is not my place. It is way above my pay grade. I am too busy doing what Jesus told me to do. I don’t have time to do God’s personal work.

So, what am I supposed to do? I am supposed to make the light of truth shine. I am supposed to take Jesus to those who need him. Few priests are seriously doing that now. The Pope is certainly not doing it. But if I cared for misconduct, bad teaching, worse example … I would be the their judge. Problem is … I am not. They may try to judge me unworthy, like those who want me to recognize their authority over the Pope’s authority… Well, too bad. Deus solum me iudicat. If God judges me adversely for recognizing the authority of the man God told me to obey then … that’s impossible. God cannot contradict himself.

What is going on, then?

I think we are entering a big storm. A storm so huge that will alter the world we live in completely. Read the teachings of Our Lady of La Salette. What we are living is detailed there. But we can look at it from a different angle:

We can be sure that Christ is still in control. We will not have to suffer one ounce of evil beyond what God allows us to endure for our own good. God is good and He is a benefactor. Our blessings and trials are all grace. We cannot allow ourselves to lose hope. We are under apostolic commandment to rejoice, even in the present circumstances. Christ is with us as he promised he would be. There is no room for distress in a Christian heart.

This awful crisis is necessary for the expiation of sin in the Church. In Luke 13:6-9 there is the parable of the barren fig tree. There, the landowner wanted to cut down a fruitless tree but his servant begs him: “Sir, let it alone this year also, until I dig around it and put on manure. Then if it should bear fruit next year, well and good; but if not, you can cut it down.” If we see manure everywhere that is paradoxically a sign of God’s curative action so that the Church can produce good fruits again.

In Luke 12: 42-43 Jesus asks: “Who then is that faithful and wise steward, whom his master will make ruler over his household, to give them their portion of food in due season? Blessed is that servant whom his master will find so doing when he comes.” This is the “due season” to feed the Church with the fruits of truth. This is our time to shine as faithful servants, to make sure we are busy teaching others the doctrine we have received from the beginning. “Those who are wise will shine like the brightness of the heavens, and those who lead many to righteousness, like the stars for ever and ever.” (Daniel 12:3 NVA)

Conclusion: my part is to declare the Gospel to all creation within my reach. God said nothing to me about judging the Pope, or about electing Popes, or about scanning thousands of years of Canon Law to find out if the Pope is the Pope. What if I conclude beyond any doubt that the Pope is a usurper? Should I gather an army and march on Rome? Should I form a new Church? Actually that was done and it has not worked very well. Or should I focus on doing what Jesus told me to do, and leave the things I cannot control to Him?

The advantage of letting the light of the Gospel shine, is that it has a disinfecting effect. We are going to get rid of the perverts, Communists, and other morons swarming around us by making the truth shine, not by changing Popes. God can change a Pope in a minute. God can make a perfect Pope from a lump of mud. He is not doing it though. He must know something that I don’t.

So, I will live in my own little world. I will stick to my duties and faithfully wait for God to get me through the crisis. No crisis is too big for Him. That is one lesson I learned from Don Camillo: keep talking to Him, keep walking with Him, and keep the plow on your own row.

Mary, our Mother who comes to us to lead us back to her Son and His true teachings, pray for us.

4 thoughts on “A little world”