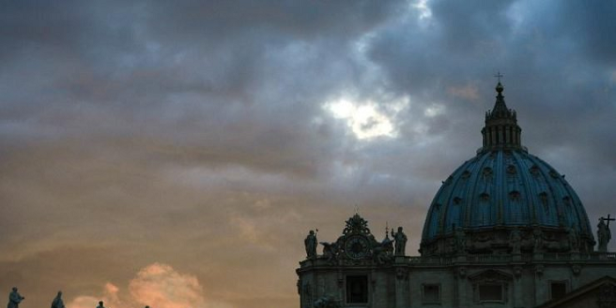 Before going into a fifteen-day hiatus to do some urgently needed maintenance around my digs here in the Queen City of the River Plate … I want to first thank all the folks who supported this blog over the years and particularly during the last few weeks when —according to pontifical analysis— the Pachamama has been angry at us, sending viruses, killer wasps, and the usual load of earthquakes, forest fires, tornadoes, volcanoes, locusts swarms, and new releases by Miley Cyrus.

I am tempted to but won’t talk about politics because I hate to merely repeat what more informed and prepared people are saying already. The general principle applies: “place not your trust in princes.” I try to keep that in mind.

Does anyone doubt by now that we have been living in the end times for quite a while? I don’t. In fact, I am under the impression that the 1960’s saw the beginning of the end of a thousand-year siege of the Catholic Church.  As the Church enters this time of diabolical disorientation, the world spins out of control as well. The Church is the only hard reality in a world that is going up in smoke.

I heard someone said:

“Evil will not get the final victory. Good will ultimately be victorious, life will triumph over death, love will overcome hatred.”

I agree with that. Outside the world rages. Stat crux dum volvitur orbis: The Cross is steady while the world is turning. Again, someone had a bit of fun rhyming:

“As the world rages, I read the pages
of wise old sages of the Middle ages.”

I could have authored those words. I do not find much use in raging against the corruption coming at us from all sides. He who fights the dragon, becomes the dragon. That is perhaps the reason why God named his people Israel which, roughly translated means: “The struggle belongs to God.”

This battle is not for you to fight; take your position, stand still, and see the victory of the Lord on your behalf, O Judah and Jerusalem.” Do not fear or be dismayed; tomorrow go out against them, and the Lord will be with you. (2 Chronicles 20:17)

One of the news of the last few weeks was one of those involuntary revelations that come out from time to time. Careless lips sink ships! A Catholic friend of mine, trying to defend certain flamboyant cattlick meeja personality, let go some interesting information that concerned me. He said he was in possession of a memo of sorts, including police reports indicating that I am a very dangerous person who should not be trusted. My friend had been in possession of that ‘document’ for about  a decade but could not get around to let me know. Apparently the police had better things to do. To this day, I have not been indicted, something some princes may not be able to say with regard to themselves.

Being accused by the friends of Ted McCarrick, Marcial Maciel, and others cultists of the ‘love among gentlemen’ is a badge of honor for me. They have succeeded in spreading malicious rumors about yours truly for ages, at least since the days of my baptism in 2001. Now seriously, the faithful have been waiting for two decades for me to do some spectacular wicked deed but … nothing has happened yet. Not only I am wicked, I am also lazy in effecting my long announced wickedness.

In the meanwhile: Marcial Maciel was outed as a pedophile, homosexual, Carlos Miguel Buela was confined to a monastery cell because of some nasty activities, a bunch of my accusers (list is too long) are now members of the Pachamama religious association soon to join the Global Federation of Churches. On August 2001 one of their priests told me: “No one knows what porneia means anyway!” (???) and it was 2006 when I was told by another stellar theologian: “The Mass is what the Pope says it is!” (Wow!)

While those have done those deeds, I have perpetrated this blog you are reading now. Mea culpa, mea maxima culpa. (See Matthew 7:15-20)

In the past some of those very characters have deceived me and robbed me of what is rightfully mine, defamed me, deprived me of employment, etc. etc. My lawyer saw a gold mine in all of that but I do not think he will have time to even make his case. The way things are going, this world looks more and more like a goner. I told you here about the miraculous reappearance of my book collection lost half a century ago. Remember? See A Small Restoration following the link to refresh your memory.

At the time I found those books, I had one of those premonitions, I dare not call it a locution but it may be: “Be faithful I am restoring all things to you.” Perhaps it was just wishful thinking on my part, perhaps not. Yet, that made me think of so many things that have been restored to me since the day of my baptism.

“The hour is coming, indeed it has come, when you will be scattered, each one to his home, and you will leave me alone. Yet I am not alone because the Father is with me. I have said this to you, so that in me you may have peace. In the world you face persecution. But take courage; I have conquered the world!” (John 16:32-33)

This Scripture goes together with this:

“Jesus said, ‘Truly I tell you, there is no one who has left house or brothers or sisters or mother or father or children or fields, for my sake and for the sake of the good news, who will not receive a hundredfold now in this age—houses, brothers and sisters, mothers and children, and fields, with persecutions—and in the age to come eternal life. But many who are first will be last, and the last will be first.’” (Matthew 19:28-30)

While we enjoy our home detention due to that pesky virus, we are given time to catch up on our reading, praying, meditation and such. That is the silver lining, the gift of Divine Providence. If I had been employed, I would be wasting my time in some cubicle typing stupid code to be processed for who knows what idiotic purpose. Instead, I am granted modest but very effective means to grow in the faith, I am learning a new language, and I have found a pearl of great price. I will tell you more about that in future posts.

Now before me: I must empty my modest apartment so the floors can be sanded and the walls be repainted. The exercise will do me good. Please pray for me but most importantly, pray for those sorry people who persecute me out of envy, homosexual rage, masonic odium or who knows what. They are in greater danger than I am, and they are all morons, they will never figure their way out of their pitiful predicament by themselves. Let’s help them out. Their time in this planet is running out.

Thank you for your interest and support through the years. God bless and protect you and your families in these wicked times.

15 thoughts on “Catching up on events”