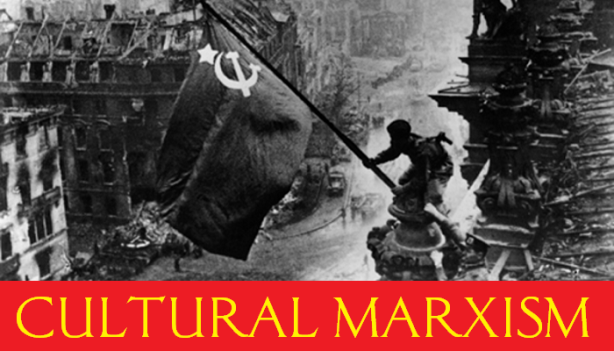 After so many years of living with Cultural Marxism it remains clear that those first moves against religious practices in the 1960’s were designed to limit the people’s use of their Churches to do any social work. Cultural Marxism aims to make individuals dependent on government. They do not want people to even consider their local churches as instruments for social improvement.

Overall, Marxism seeks to separate the individual from his points of reference by cutting off his ancestral links to God, family, property, tribe, race, or anything that could even remotely help him achieve a certain degree of freedom. This is done in such manner that once man is isolated, he can belong only to the State and feels identified with nothing but the State’s goals and aims.

To reduce man to that unnatural condition the media (entertainment, news) have been weaponized as a propaganda tool: art, literature, cinema, television, newspapers, magazines, etc. are loaded with certain concepts that help government prepare the minds of the public, making it more receptive to collectivist ideas. When that training is completed the individual sees the State as his protector, the only solution to all his problems.

Since times immemorial mankind has been working in common projects meant for the good of the majority. Naturally men and women generously surrender part of their freedom and follow those who are obviously capable of leading the group successfully to the desired end. Culture itself is a collaborative effort where everyone participates in one way or another. That has always been that way though history. Never before “experts” have told us that something incomprehensible or ugly must be accepted as a great message or as an object of beauty. That is one of the ways Cultural Marxism utilizes collectivism as a way to politicize social efforts, placing them under the authority of the Marxist elite. Collectivism transforms any natural human endeavor into a rigid program that in essence requires the de-humanization of both the ones directing, and the ones being directed. If anything is important Cultural Marxism wants it under government control.

Notice the inversion of the moral direction when both forms of collective effort are compared. In normal, organic collective human endeavors the individual donates his efforts willingly, understanding that those he loves (family, tribe, homeland, country) will be the beneficiaries of his generosity. That is what we call a noble, godly cause.

Ecclesiastes 3: 9-13 – What gain have the workers from their toil? I have seen the business that God has given to everyone to be busy with. He has made everything suitable for its time; moreover, he has put a sense of past and future into their minds, yet they cannot find out what God has done from the beginning to the end. I know that there is nothing better for them than to be happy and enjoy themselves as long as they live; moreover, it is God’s gift that all should eat and drink and take pleasure in all their toil.

The unnatural Marxist variation is different. Man works for his Marxist masters but he is not happy or take pleasure on his toil when someone is deciding for him how much he is going to give to the common cause. Coercion by government replaces the generous giving of one’s work. Once Marxism gets to control moral definitions it takes total command regardless of the worker’s individual will.

In the natural system man is a volunteer, in the Marxist system man is a mere recruit and his only motivation is the fear of the oppressing power of government. The State uses a false moral necessity to take as much freedom as possible from the individual. In that perverse arrangement individuals have to surrender their own humanity. No one, absolutely no one, is a citizen; not even the leaders who always run the risk of falling in disgrace at any time.

In this manner the problem that Marxism was trying to resolve by means of collective action ends up causing an even greater damage. That is because the collectivist dictatorship ends up depriving every participant of his human condition. There is no greater loss in this world.

The mission of critical theory is the hostile examination of every aspect of traditional life from the perspective of Marxism. Certain things that are commonly accepted like “Columbus discovered America”, “Shakespeare was a person”, “there is no place like home”, “honest work is good for the soul”, “men are born free”, “families are the foundation of society”, “the Bible is the Word of God”, “Christ died for our sins”, etc. are systematically attacked in books, essays, in the news, among educators, and even among clergy. Impressionable young people are constantly indoctrinated by these critics who present themselves as the voice of truth. They believe they have come to show the world how to no longer believe in “superstitions” from “the dark ages.” Soon young people end up losing all moral or intellectual frames of reference and gradually become unable to determine what is true. They end up accepting the word of the Marxist in front of them as if it was divine truth when in reality it is only the consensus of the Marxist academic majority that surrounds him. In that way slogans and labels like “the repressive patriarchy” or “colonists always abused the natives”, “the Crusades were genocidal expeditions financed by the Vatican”, “the Inquisition killed millions”, “the riches of the Church could feed the whole world” and all kinds of similar nonsense end up replacing all the traditional points of reference. The victim of that ruse never analyzes those slogans in detail because the aggressive analysis is reserved only for traditional values. It is never permitted to do the same with Marxists assertions.

That is why most people today accept certain affirmations as truthful, for example: “bankers and conservative politicians are anti-Semites, xenophobic, racists, misogynists, hypocrites that adhere to obsolete religious principles” etc.

Those twisted principles have been planted in the minds of young people for a few generations now. That is why they come up in conversations, books, stories, song lyrics, theater plays, and all the cultural and intellectual output of recent generations. We are witnessing the effects of this anti-Gospel in Western culture. Where the Gospel of Christ gave life now the message of Cultural Marxism is generating a culture of death, dragging to the abyss everything in its path to build the abomination that will emerge from the depths to fight against Christ in the last battle.

This is not a pleasant time to live in. Jesus was born in a specific time in history to give witness to the truth. Just as Jesus was not exempted from his duty; we will not be relieved from ours.

This is perhaps the most difficult time in history to teach the truth. This is an age that cannot tolerate truth and love lies. One Fleetwood Mac song from the 1980’s comes to mind: “tell me lies, tell me sweet little lies.” Just another insidious little message planted in the minds of millions of youngsters.

This is the time to declare the truth

We have the example of the saints and martyrs that had to face their own personal apocalypse. Some left us not a word. Some showed us how to live; others showed us how to die. Many of them preserved the truth when everything around them was collapsing. Two of them come to mind: St Augustine of Hippo and St Isidore of Seville. They had to live through the end of the Roman Empire. St Isidore saved entire libraries from ending in the campfires of the Visigoths. St Augustine laid the foundations for the first systematic theology of the Catholic Church. Both saints were looking far beyond the ignominious end of the Roman Empire. Both of them knew that God brings order from chaos, renewing the face of the world through the action of the Holy Spirit. Their faith sowed the seeds in times of tears so others could reap the harvest in times of joy.

Those two saints gave us a good example. We cannot fix a world that has drifted far away from God but we can give witness to the truth defending our faith. If Christ has to come earlier because “otherwise no flesh would be saved”[1] that is a good indication that the situation is going to get much worse. It is going to get very dark and yet as darkness gets thicker, Christ gets closer. He is going to shine His light on this world and no one will be able to stop Him. “Fear not, little flock; for it is your Father’s good pleasure to give you the kingdom.” (Luke 12: 32)

Cultural Marxism (The Corruption of America) a film by James Jaeger.
Fools, Frauds and Firebrands: Thinkers of the New Left, by Roger Scruton.
Knowledge and Power: The Information Theory of Capitalism; by George Gilder.
Wealth, Poverty, and Politics; by Thomas Sowell.
Liberalism: Sin, Inquity, Abomination; by Fr Horacio Bojorge, SJ.
Liberalism Is A Sin; by  Fr Felix Sarda y Salvany.